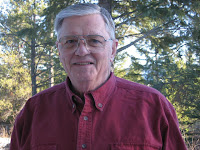 Boundary County businessman and community volunteer Tom Hollingsworth on Thursday, December 20, announced his candidacy as state representative for District 1, saying it has been 20 years since Boundary County has had a local Representative in Boise.

Tom and his wife, Toni, moved to Boundary County 20 years ago and opened a retail garden center, Holly Gardens. Throughout his time here, he has been active in the community, serving for many years as a volunteer in the Sheriffs Office, as a member and past chairman of the county translator board, on the Neighborhood Watch program, in the North Bench Fire Association, and on the county Youth Advisory Board. He has served on the Boundary County Planning and Zoning Commission for several years and is currently its chairman, and he was recently appointed by County Commissioners to serve on the county Guardianship Board.

In announcing his bid for the State House, Hollingsworth said he would like to take his community service one step higher.

“Bonner and Boundary Counties need a voice in Boise that can be heard,” he said. “There are many important issues; transportation, quality jobs, law enforcement, an educated workforce, senior citizen concerns, primary care funding, elimination of the grocery tax, elimination of the business property tax, affordable housing, a cap on real estate assessments and more. I feel the State of Idaho has to step up to the plate and lend assistance to rural counties that have a low population base, and therefore a low tax base.”

Having known Tom and his wife, Toni, for many years now, I need to add how much both of them have given to our community in terms of volunteer work. Toni has been a major mover in getting more people active in the local Democratic party. She also just brought in much needed grant money for the Restorium. She has organized the twice yearly "Take-It-Or-Leave-It" days at the county landfill. And of course there's much more. Tom's volunteer activities have been vital to our community, a community in which volunteers are often stretched thin. And both of them take their volunteer activities very seriously.

Both Toni and Tom were active in sales before retiring to Bonners Ferry. That's if you can call opening a nursery retiring! With the nursery now closed, except for the beautiful cut flowers they make available all summer, most of their time is dedicated to the community.

Boundary and Bonner County Democrats are elated that Tom has stepped forward to become the Democratic candidate for Congressional District 1. He will be running for the seat that Republican, George Eskridge, has occupied for years. Known as a representative who does little for District 1, it seems high time for George's position to be filled by someone who truly represents both counties, especially someone with the willingness to be active. With a degree in business from Johns Hopkins University in Baltimore, as well as the respect he has from so many of the people he knows through his community involvement, Tom is, by far, the best candidate for the job.

Watch for him in his red suburban with the large signs on the car! He's always happy to stop and chat about District 1 concerns. From meetings to just filling up the car with gas to community activities, and even behind the bar in Clark Fork, say hello to Tom, voice your concerns, sign up for volunteer work, and let's put District 1, the crown jewel of Idaho, back on the congressional map!
Posted by Linda/IdahoRocks at 9:31 AM

Hi. Sorry to leave an off-topic comment, but there's no contact information on this site for the owner.

I'm working on behalf of J-Lab (http://j-lab.org, the Institute for Interactive Journalism at the University of Maryland, a project of the John S. and James L. Knight Foundation) and the Center for Citizen Media at Harvard University. I'm helping to expand a database of sites from the U.S. and Canada that offer at least some citizen journalism periodically. Based on posts like this one, your site seems to qualify.

It's part of the Knight Citizen News Network: http://kcnn.org

We're including some basic information about your site in our database, but we'd really like to include more about what you're doing. We have a short web-based survey for owners or managers of sites that include citizen journalism. I'd like to ask you to please take five minutes or less to fill it out.

TO RESPOND, PLEASE E-MAIL my colleague Amy Gahran (amy@ireporter.org) and she'll send you the link to our survey for site owners. (I'm not leaving the link in this comment because the survey really is only for site owners or managers) Also, e-mail Amy if you're not sure whether your site belongs in our database, or if you have other questions. I, Reporter is a media consulting firm conducting this survey on J-Lab's behalf.

DEADLINE: It would be most helpful if you could complete this survey no later than Wednesday, February 27th, 2008.

If you're not the appropriate person to complete this survey for your site, please forward this message to the right person and ask them to complete it.

Hey right on for Tom! He bought our house(Which is now Holly Gardens)20 years ago when he moved to Bonners Ferry. Good job buddy! I miss that place.