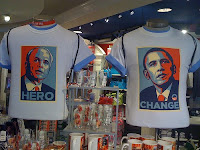 I originally saw this on OpenLeft this morning. It's a photo taken by loojie at DC's national airport. It's tagged with the headline "Fair and Balanced." The Republicans seem to have a real knack for tipping the truth scales. The network coverage of this presidential campaign should be interesting, and hopefully not downright irritating. I'm curious about where those T-shirts came from....

Of course the biggest headline these days, running neck in neck with Gustav is that hero of the Christian Right, Senator Stevens, Big Oil, and foreign policy expert, Sarah Palin. I believe that this morning, Governor Palin has won the race with Gustav because of her announcement that her seventeen year old daughter is pregnant, that is without the benefit of marriage. You know, the information that her daughter is pregnant doesn't bother me, although I think that it is irresponsible. Given her parents Christian Right background, I do wonder if her only education on the topic was one of abstinence....a deplorable use of the term education when young adults should be taught about protection as well. This news brings up topics which should be discussed, although I think that the privacy of the daughter should be respected. On the other hand, Palin did accept a Veep position which means as much public exposure as the media can grab. And given how much of a surprise it was and is, I can't imagine that we're going to hear about much of anything else in the next two months.

Sisyphus at 43StateBlues has a great summary of who Sarah Palin is, while Red State Rebels chimes in twice about the chimera. IdaBlue thinks Palin will implode within two weeks, which I certainly hope for but the media has a way with toying with my sense of reason. Of course Morialekafa had his usual bit of fun with this nomination, should you need to find some humor in the selection. And then there are the Idaho extremists, including the Village Idiot and the wingnut.

The presidential race has certainly become interesting, but what will be even more interesting is how fair and balanced the media will actually be.

Go Democrats! Go Obama/Biden!
Posted by Linda/IdahoRocks at 9:22 AM No comments: