The gathering began at noon, but our very own Shelley Landry, as well as Cheryl Halverson, Benewah County Chair, were ready, willing and excited to be greeting our guests! 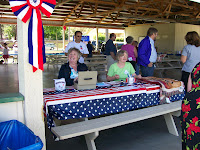 Our entertainment was an Elvis impersonator who, before the festivities really began, found the friendliest Democrat in the state! 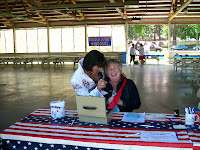 Everyone took advantage of the new Executive Director, John Foster, and I'm sure he had more ideas about how to improve the Democrats' position in north Idaho than there were brats on the barbecue. We also welcomed Larry and Pam Grant, of course our own Jeanne Buell, and notice that "...oln County" sign in the background? Well that's Lincoln County, Washington! Yes indeed, Democrats from Spokane County, Lincoln County, and northernmost Stevens County all showed up to lend support, as well as share in Democratic values. See, eastern Washington isn't all Republican.... 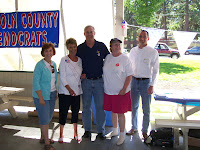 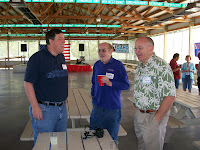 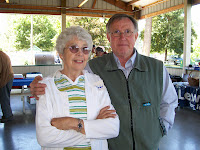 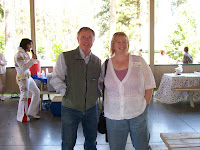 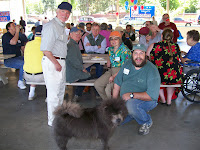 Don't think for a minute that Elvis would be hard-pressed to find his biggest fan, our own Jeanne Buell. Whatever he's singing obviously pleases Shelley as well. 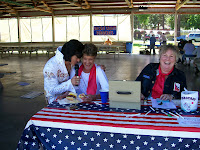 And where would we be without some delicious food and hard-working cooks at this rally. A big thanks to Dave Larsen and Steve Foxx! 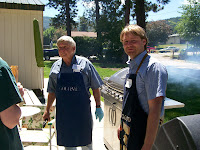 Well, finally, yours truly with her dear friend and Vice-Chair (I think of him as co-chair), the man who keeps track of the fund-raising, issues, and all the important stuff, Fred Hendrickson. 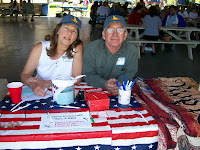 Idaho's U.S. Congressional District 1 candidate, Larry Grant, after reading a list two pages long of Bill Sali's latest idiocies as a congressional representative (check Red State Rebel's diary at the DailyKos), took a few moments to explain why an Elvis impersonator is important to Pam and himself. Wondering why? Well just ask him about the red Ford Mustang.... 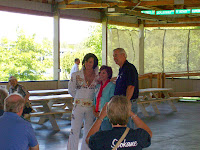 Finally, a special thanks goes to Kootenai County Chair, Bev Moss, pictured here with husband, Steve. Bev brings new life and new enthusiasm to north Idaho Democrats and helps to demonstrate what a viable and formidable group we have the potential to be. 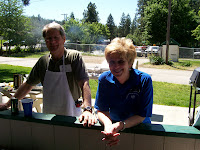 I've probably thrown in way too many photos for most people, but this was an event that drew north Idahoans together in a way that hasn't been seen before the break up of the unions. North Idaho used to be a Democratic stronghold. When I go door-to-door talking to people, everyone's concerns turn out to be Democratic concerns, yet they're voting for the wrong party, or worse, no party at all. It's time for north Idaho to turn blue, again, and, for the rest of Idaho, if you're not blue already, please join in the movement to turn Idaho blue!


Posted by Linda/IdahoRocks at 6:49 PM

I reserve the right to delete all comments, especially by those who wish to remain anonymous and who use filthy language, spread pornography, and attempt to assinate someone's good character.