Larry Grant Keeps The Turkeys Away 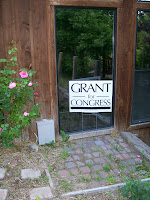 For those of you who have read some of my previous blogs, you know full well how I feel about the wild turkeys that reek havoc in my yard and garden. Recently, two GIANT toms have been attempting to fight their own reflections in my sun room window. Well, the strategic positioning of my "Larry Grant for Congress" yard sign proves that Larry Grant does know how to keep the turkeys away! No more toms. Thank you, Larry!

Speaking of Larry Grant, I got my Walt Minnick poll call today. How convenient to be both a blogger and an anthropologist: not only am I familiar with why the person is asking what, but I get to write about it! However, I'm still not certain why Minnick would support Larry Grant and then take off on his own for a run at the same position. But what do I know? I live in north Idaho, and obviously a long history of disconnect is about the only connection between Boise and north Idaho. At least Betsy Russell over at the Spokesman makes some connections, but maybe that's because she's in an even odder position: reporting on north Idaho, based on politics and news in Boise, while residing in, and working for a major newspaper in eastern Washington. I certainly have a lot of respect for that gal!

So, back to Minnick. Is it the "old guard," seeing how exciting the new guard is, wanting to get back into politics? Is it denial that Larry Grant could have lost his initial race because Idaho is, in fact, a RED state? Is it greed? Is it bold, objective reasoning? I never knew who Walt was until I was down in Boise in the spring. So, I defer to my friend, Tim Tucker's observation, and assume that this is a really nice, savy guy. But I still don't understand his motive. And if the motive is something out of Popkey's diatribe, then I'll have to completely disagree.

Also, what is all this running for the big ticket slates when our counties are filled with Republicans? If we cannot fill our local offices, county commissioner seats, city councils, local health organizations, local civic organizations, and so forth, then how does anyone think that we'll be able to elect a big ticket Democrat into office?

Finally, a request to Howard Dean, the DNC, and the IDP. I don't think we're going to be successful in turning north Idaho blue if we cannot attract a major candidate to north Idaho, say, to Coeur d'Alene. I say this not because we need the popularity, but because we're so much the bastard step-child. And we are not alone. Democrats from western Montana and eastern Washington feel the same way. So who comes to town? why Dick Cheney! And the Republicans win north Idaho again. And what Democratic candidate comes here? What representative of the Democratic National Committee comes here? Hillary raises money for herself by visiting the big stars in Sun Valley. We have big stars in District 1 too, but do they ever do anything to help the state in which they own a home? And people wonder why Idaho is red.....
Posted by Linda/IdahoRocks at 7:49 PM