Well, I finally found the recipe for a perfect loaf of bread. It seems it's all over the web: it's the No-Knead Bread adapted by Jim Lahey of Sullivan Street Bakery in New York, published in the New York Times thanks to Mark Bittman. And even better, you can even watch the YouTube video on how to do it, thanks to Bittman and Lahey.

I have to admit that I cheated, however. Instead of the yeast I use my sourdough starter. Works great! My friend, Rosemary, used the actual recipe but didn't have time to bake it for 48 hrs. It still came out great! I've added more flour and less flour and doubled the recipe as well (now I really appreciate all the cast-iron cookware that I have). I do prefer bran over semolina for keeping the dough from sticking to my kitchen towel, although I like the flavor of the semolina better. 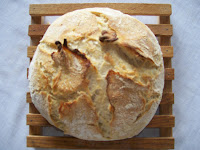 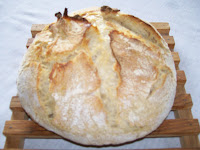 I love the flavor, the hard crust, and the tender inside. I especially love the crumb! That crumb is exactly what I have been looking for! I've also discovered that even though the bread occasionally sticks to the towel, creating a pre-baking gash, this only prevents the bread from rising as high as usual, as well as cracking, but the flavor is still great and the texture is just a bit chewier, which is something I like as well. 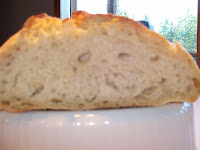 Yummy! All those holes! Thank you Jim Lahey and Mark Bittman and all you other wonderful chefs on the web! Now I make this every 2-3 nights! Let it rise until early morning when my cats meow for breakfast, then 2 1/2 hrs. later, into the oven. By lunchtime I have my favorite bread.

This does not mean, however, that I have quit making my other breads. Every bread has it's place and sometimes I do like the tighter crumb. But just making this bread, the sourdough, and even my old fashioned rolls has taught me much about bread making. I've learned how the long rise can really help with the crumb I want. I've learned how to get those rolls to rise a bit more once they hit the oven. And I've learned how hot an oven really needs to be by cooking in cast-iron.

My husband loves this bread. I brought a "sunken" (stuck to the towel) double loaf to my girlfriends' birthday party and not a crumb remained. My Monday lunch customers love the bread. And since my dentist reads my blog, I even brought him a loaf.

So, if you haven't made this bread yet, now is the day to get started!

Posted by Linda/IdahoRocks at 6:57 AM

Wow. I think when I first read "no-knead bread," I just went DOES NOT COMPUTE and didn't think about it again.

I'm going to have to rethink that stance.

As Jim Lahey says in the video (which I had trouble pasting into my blog), even a four yr. old can make this bread. And any mistakes don't seem to matter.... Enjoy!