Racism in This Campaign? You betcha!

It started after the Obama campaign began in Idaho. Our local newspaper, the Bonners Ferry Herald, along with the Idaho Statesman, printed an LTE that called Obama a Muslim who tooks his oath of office by swearing on the Iran (sic) and all sorts of other misinformation, racial slurs, and outright lies. Then, about a month ago, the Spokesman Review, decided to print the Michael Ramirez political cartoon, Lipstick on a Pig, a very racist caricature of Barack Obama. The actual cartoon can still be found at radical right websites, although it was taken off Ramirez's usual website post, Investor's Business Daily, about five hours after it was originally posted.

And now it turns out that one of our only large Obama signs in Bonners Ferry has been defaced by someone who spray-painted a large, black "N" over the "O" in Obama. 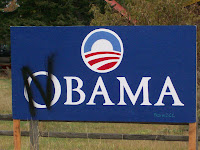 Is this an act of hatred and racism? An adolescent prank? A politically motivated activity? Well the Boundary County Democrats are providing a reward for information that will lead to the arrest of this person or persons. Why? Because not only is this a rash and egregious political act, but with its undertones of racism, if not blatant hatred, it is a message that most Idahoans do not want to send. Republicans and Democrats alike have worked very hard to fight the presence of Aryan Nation types, to promote Human Rights, and to make our state too great for hate. Such defacement of a political sign is not good for the election, for the county, for the state or for the nation.
Posted by Linda/IdahoRocks at 9:31 PM

I agree, defacing any sign is wrong, and should be handled.

So whats your take on the local races? Commissioners? Sheriff? Etc. Just wondering?

Are you voting staight party, or something else?

You might be right about the significance of the "N", but I've seen a lot of "NObama" signs that exhibit euphony, not racism.

It was a black "N," posted not before or above the "O" but over it. It happened in Bonner County the same weekend. To me, this is organized racism. See my previous posts on racism in Idaho: A State Too Great for Hate, Racism in Rural America, Had Enough?. Idaho is a state too great for hate, and although we may all say what we want, as granted us through the First Amendment, the destruction of private property is illegal. As Obama has so well demonstrated, more can be accomplished through tolerance and unity than through disrespect and hate.

Furthermore, other racist and hateful acts against the Obama campaign have appeared in the media, including the disgusting and egregious killing of a bear cub in North Carolina. That was really sick.